Jennifer Bramlitt allowed her two dogs outside for a “potty break,” including English bulldog “Chug.” She walked away to get their usual treat when she heard a car door slam. In less than 60 seconds, Chug was stolen out of the rural home’s yard. He is not the only stolen bulldog in a lucrative crime of English bulldog theft. 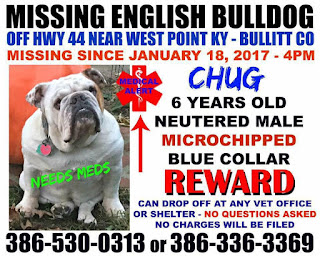 Jennifer and her husband, Robert, live in West Point, Kentucky with their two dogs, including “Chug.” Although both dogs were together, the other dog was not stolen. Robert, who is a United States Army veteran, spends every spare moment following leads, driving for miles and web surfing for hours looking for Chug.
Some unscrupulous professionals assist in dog theft across the country. For unusual, expensive, and popular breeds, some veterinarians, grooming shops, and other professional dog caregivers sell lists of owner’s names and addresses to thieves. Theft rings may have “lookouts” to spot the breed. If the stolen bulldog is neutered or spayed, thieves will either resell the dogs to unknowing buyers or use them in dogfighting as bait or fighters. 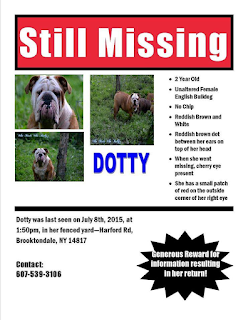 In 2015, Robin Harrington was taking photos of “Dotty” in her yard behind her locked gate when she had to go inside the house for a few minutes. Robin had no worries – she lived in a wooded area far from neighbors. When she returned to the yard, “Dotty” was gone. Law enforcement located a spot in the woods where the thief had conducted a prolonged surveillance of the house.
Theft of this breed can turn dangerous for owners. Another English bully was stolen from a Seattle man with disabilities, making national news: the gentleman was walking his bulldog when three people roared up beside him in a car, shoved him to the ground, and stole the dog. The dog was found running in the street where it is believed the thieves cut him loose when they felt the pressure of exposure. And Kristi Baucum’s puppy, Trudy, was stolen from her at gunpoint. The thief was caught, but too afraid of repercussions from his accomplices to tell police the dog’s location. Trudy is still missing.

The American Kennel Club lists English bulldogs as the fourth most popular breed in the country. English Bulldog owners will confirm; this is neither a “typical dog” nor the type that is kept out of the family circle. The Bulldog Club of America notes, “Constant learning, a knowledge of genetics and inheritance, familiarity with health issues, and understanding pedigrees is essential,” and “it is important (owners) … have a veterinarian who is knowledgeable and has experience with Bulldogs.” These are “man-made dogs,” says one experienced bulldog owner. Once used as butcher’s dogs to subdue animals for slaughter, they have been “bred and crossed with other types of dogs” to acquire the look of today’s “bully.” Thus, they are prone to many health issues, including breathing, stomach problems, rickets, and “cherry eye.” Most are on medication. Females must have cesarean births. Many bullys are turned in to rescues or dog shelters because these adorable puppies grow into high-maintenance, stubborn, expensive animals. If bred well and treated right, English bullys are loyal, guarding property with aggressive-sounding barks but turning into “big babies” for tummy scratches and treats.
Tessa Houck’s “Goobie” was one of those “big babies.” The Houcks live in a quiet neighborhood in Morgantown, North Carolina. One June evening of 2016, she let her English bulldog “Goobie” out 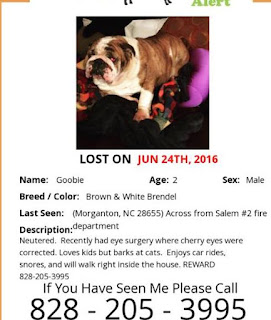 into her backyard for his “potty break.” Goobie was outside for perhaps ten minutes. Tessa had no worries as a high privacy fence with a locked gate surrounds her yard. But in that short amount of time, “Goobie” was stolen. She immediately performed a detailed search of the area but he was gone. Its possible neighbors stole him; he may be in West Virginia. She still searches for him, hoping someday her loving big, goofy dog will come home.
There is a Facebook team of “web sleuths” working together to help locate the stolen dogs and to share information on suspicious persons and vehicles. Losing a family dog is heartbreaking, and having that pet stolen can be worst. Besides flyers and ads with information on Chug, Robert and Jennifer Bramlitt posts a plea:
To the person who took our boy PLEASE BRING HIM HOME!! I will put a leash at the end of our driveway (YOU KNOW WHERE) and you can come in the middle of the night and leash him up there. Just PLEASE bring him back to us. Our family is broken without him. I am BEGGING you please bring our boy back. He needs medication and special food and WE NEED HIM !!!!!