Lawrence S. Bittaker was half of the serial killer duo known as “The Toolbox Killers” along with Roy L. Norris. Bittaker died from cancer on Friday, December 13, 2019, while incarcerated on San Quentin’s death row. His death is causing a social media frenzy, to include many people expressing grief over the death of this kidnapper,


Bittaker and Norris were dubbed the “Tool Box Killers” as they utilized a toolbox filled with hammers, ice picks, and pliers to torture and kill their victims. The serial killers murdered at least five innocent girls in a 1979 crime spree. 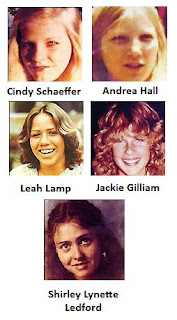 Bittaker and Norris, both career criminals, became friends while incarcerated at California Men’s Colony in San Luis Obispo. They shared their fantasies of kidnapping, torturing, and murdering girls. Upon release, they outfitted a van with sliding doors; naming it “Murder Mac” and set about making the sadistic fantasies come true.
Bittaker and Norris jabbed ice picks into the ears of their victims. They beat them severely. They raped and sodomized, used pliers to rip and tear sexual organs, and strangled them, to include using a pair of pliers to tighten a wire clothes hanger around one girl’s throat until it was the circumference of a quarter. The duo forced their victims into posing nude for Polaroid photos. And in the case of 18-year-old Andrea Hall, Bittaker taunted her about killing her before he shoved an ice pick through her ear into her brain. He flipped her body over to thrust the ice pick into her other ear, stomping on it until the handle broke. And each victim was pitched out of the van to rot like trash.
Shirley Ledford was only sixteen when Bittaker and Norris abducted her. Bittaker had audio recorded Shirley as he beat and tortured her. When it was played during Bittaker’s trial, people wept openly, including the prosecutor; some listeners had to rush out of the courtroom to escape the girl’s screams of agony
and terror. Even Roy Norris said, “If you ever heard that tape, there is just no possible way that you’d not begin crying and trembling. I doubt you could listen to more than a full sixty seconds of it.” But Bittaker smiled in court as Shirley’s sobs filled the courtroom.

Lawrence Bittaker’s death may help some people, including surviving victims, rest easier. The majority of those on social media remember Lawrence Bittaker as part of a ruthless, cold-blooded duo who committed evil acts. But many people are using social media to express grief: “Rest In Peace Larry” is a popular epitaph along with a photo of Bittaker. One Facebook page requests, “Take a moment to pay your respects (to Bittaker).” There remains a population who mourns his death and is saddened by his passing. Some people are posting notes for this savage, frightening killer to rest in peace. 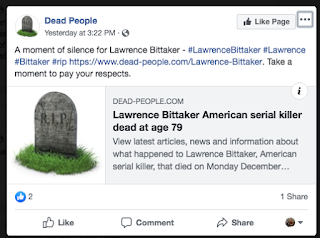 One Facebook user reports they “know (Bittaker) expressed remorse in the end.” This is not so, says true crime author Laura Brand, an expert on serial killers who has kept in constant touch with Lawrence Bittaker for the last six years. “Bittaker had no remorse for anything he did. Ever.” She has been working with Bittaker on locating the bodies of two missing victims, bodies that have never been recovered, hoping to bring closure to families. “There was no emotion when he talked about what he had done.”
Perhaps those mourning Lawrence Bittaker have forgotten about the five innocent murdered girls and the girl’s loved ones. Maybe the mourners have never been victims of crime. The hell that Bittaker unleashed during his life deserves not one moment of respect. I hope no one ever has to go through what these young victims endured. I hope no one ever has to be a family member or friend of someone who met a Bittaker or a Norris. And I sure as hell hope those who think Bittaker deserves any respect, even in death, will take a long look in the mirror and ask themselves, “What if it were my child on that audiotape in that courtroom?”

Rowley, M. (December 10, 2019) Would You Pick Up The Phone if a Serial Killer Called? HuntAKiller.com