“Jack the Ripper” In American Headlines


One of true crime’s most famous unsolved cases occurred in 1800’s Whitechapel District of London. The perpetrator was called Leather Apron, the Whitechapel Murderer, and The Ripper. The killer is most known by the moniker “Jack The Ripper.”
The London Metropolitan Police Service’s police docket contained eleven separate murder cases between April 1888 to February 1891 labeled “Whitechapel murders.” As with all serial killers, the true number of victims will never be known. Historians and criminologists argue that five of these Whitechapel murders, all occurring in 1888, are directly connected to Jack The Ripper; they are called the “canonical five”: Mary Ann Nichols (August 31), Annie Chapman (September 8), Elizabeth Stride & Catherine Eddowes (September 30), and Mary Jane Kelly (November 9).
“Jack” made headlines all over Europe, but the killer also caught the imaginations of American journalists. The term “serial killer” was far from the invention. There were other fiends in the U.S. headlines. “The Bloody Benders” ran a murderous inn (1872-1873), but escaped prosecution. Jesse Pomeroy, the boy who killed children, was in prison. Killer nurse Jane Toppan (1885-1901) was declared insane. They killed many, but they were all identified. But Jack, whoever they were, was a real nightmare: slinking about in the shadows, striking viciously, then disappearing like smoke. No one even knew if Jack was a man or a woman!
The Statue of Liberty had stood in New York Harbor a month shy of two years when the murders of Elizabeth Stride and Catherine Eddowes made the San Francisco Examiner’s front page. One American journalist wrote the “Home Secretary” was an “imbecile of plans” and the “Police Commissioner halting in action,” for not offering a reward for the arrest of the “madman … stealthy assassin” who has now murdered three times. Before profiling became a tool to help catch killers, the writer profiles this killer as a man who “must lodge where people see him come and go…eat, drink, and sleep” near the crime scenes, and “must be aware of the intense abhorrence inspired by his crimes.” The writer notes “a horrible sameness” in the three murders (Bennett).
A short blurb appeared in a Pennsylvania newspaper around this time, stating a London coroner “create(d) the belief” that the Ripper murders “were committed by an American.” This blurb wedged in between a man convicted of polygamy (15 of his wives appearing in court) and the pardon of a millionaire murderer (“Boiled Down,” p.12).
The gristly crime scene of Mary Jane Kelly was detailed on page one for all the readers of The Butte Daily Post in Montana, with speculation of her killer’s actions: “Probably no one saw the man … hardly likely he will be identified. He might easily have left the house at any time … without attracting attention” (“Another Whitechapel Murder”). 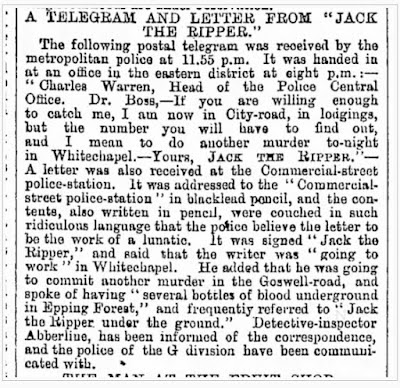 
The Daily American out of Nashville, Tennessee, dedicated most of page 10 to the crimes, including a lengthy, detailed, full-page walk-through of the Whitechapel District by an American journalist accompanied by a London detective. The journalist noted the guests of one tavern, “Women … with somebody’s babies, blaspheming and drinking spirits with the bullet-headed infants hanging over their shoulders like bundles of rags.” The tour included “Annie Chapman’s death place” described as a lowly brickyard. Next was a tour of “the typical lodging house of the Whitechapel district … revolting. The price for a single bed is but a penny or two. The lowest of all God’s creation may drink, shout, and blaspheme all night for only two pence.” There was much writing space dedicated to describing the filthy rooms housing the criminal elements, drunks, and skinny children, with rats and mice crawling in between people. The rooms were tiny, “no larger than a closet,” with a bed just large enough for one to two bodies. The physical description of the ugliness and filth of the people and their surroundings described at length. This article nearly squeezes out an interview with First Lady Anna (Mrs. William Henry) Harrison and her complaint that the White House has “no feeling of privacy” (July 21, 1889).


Chicago readers opened their February 14, 1891 newspaper to an article that notes a London suspect was arrested “on suspicion” and details the murder of a woman named “Carrotty Nell,” a young prostitute (AKA, “an unfortunate woman”) found with her throat cut. The London police were sure the murderer was Jack The Ripper, without mutilation as an officer came upon the crime too soon. Examining Nell’s clothing, “a second hat was found.” Thus, the theory that “Jack” was a woman because “the second hat was not of the same size as that found on the dead woman’s body” (p.5).
Finally, some American journalists found fault with London law enforcement as often as possible. The use of bloodhound dogs to track the killer was useless; it was “plain enough to an American” that “Londoners know very little about the nature of (bloodhounds).” This next to an entire article detailing the reckoned ignorance of a search using tracker dogs. And “sexual perverts” are “practically unknown in America, but in countries where there is less freedom, and where the relations of the sexes are not on such a natural basis…” perverts run amok. The geography of London writes a journalist confuses as it is “built on the most irregular lines” with short, one-way streets, small blocks, alleyways, and narrow, winding lanes. And then the perceived ineptness of the London police force: understaffed, poorly trained, and plainclothes detectives easy to spot in the lower ends of the streets. “I would advise some American to come over (to London) and prove that there is a detective left who can detect” (“The British Ghoul,” p. 12). In another article, an American journalist wishes American detectives could travel to London, as they would quickly solve the crimes. No wonder, many American journalists sniffed, Jack The Ripper cannot be caught.
The newspapers of the 1800s make for exciting reading about one of the most famous unsolved crimes in history. Much like today’s criminal justice news, it includes releasing sensational and gory details to the public, amateur profiling, guesswork, “filler” news, harsh judgments, and opinions of what should, and should not, be happening to solve the case. Regardless, the “Jack The Ripper Case File” has never been solved.