March 16, 2020
Netflix has debuted another true crime case series; “The Trials of Gabriel Fernandez” covers the torture-murder of a severely abused eight-year-old boy, Gabriel Fernandez, at the hands of his mother, Pearl Fernandez, and her boyfriend Isauro Aguirre. Four Los Angeles social workers were charged with child abuse and falsifying records. The case was exposed in May 2013 when Pearl called 911 to report Gabriel had stopped breathing. Netflix’s series is a recap of this abuse, blow by blow. Besides emotion, what can we take from this case? And what do we need to know about the Gabriel Fernandez torture/murder case?
If we learn nothing from a horrific event, true crime filmmakers have wasted time reporting and audiences watched for naught. Becoming angry, disgusted, saddened, and appalled are easy enough. What is most important is what we can learn? The intent here should be to prevent horrific incidents in the future. It’s easy to anger or sicken your audience. It’s harder to make them act.
But it is difficult to take action when we have no idea where to start. So we seek scapegoats. Or we try to clean up a mess. And we begin a blame game. In this case, a decision made to prosecute the social workers that “failed” at “protecting” Gabriel Fernandez. But is this fair?
Prosecuting people who “failed” at “protecting” Gabriel could begin with the hospital where he was born. According to family members, Pearl abandoned Gabriel there. Next, Gabriel went to a loving, same-sexed couple; but because of family homophobia, they allegedly gave him up. The child then went to live with a woman (grandmother) who was abusive. And then he landed in the middle of his mother’s house. So, who failed Gabriel first? 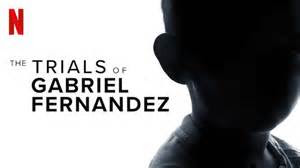 Gabriel’s biological mother, Pearl Fernandez, pleaded guilty to first-degree murder in 2018 and was sentenced to life without parole. Isauro Aguirre, Pearl’s boyfriend, was found guilty of first-degree murder and was sentenced to death. They will die in prison, despised by many. They are called “monsters.” But were they always such?
Somewhere along their way in life, Pearl Fernandez and Isauro Aguirre learned that harming a child was acceptable. While Isauro meted out the blows, Pearl encouraged the abuse. Between starving and the bindings, the shootings and punishments, Gabriel did what kids all over the world do: longed for his mother’s love. An emotion that Pearl had long lost touch with before she ever gave birth.
Pearl Fernandez’s family has explained that Pearl “started using drugs at an early age which stopped brain development.” Pearl grew up in a home of abuse; she began using methamphetamine and drinking as a 9-year-old. Unable to tolerate her mother’s beatings and a father who ping-ponged between the family house and jail, Pearl ran to the streets at eleven. “She was diagnosed with depression, bipolar disorder, PTSD, suffered from eating disorders and had abnormalities on her scans. She was also a victim of gang rape” when a group of men held her hostage for several days. Then there was the “rape by an uncle at an early age” (Verhoeven, 2020). By the time she began having children, Pearl Fernandez was an angry, sad, uneducated woman. Not surprisingly, Pearl had a history of abusing her children, losing custody of one child, and abandoning another. She had a history of domestic violence, including at the hands of Isauro. Before Gabrielle’s death, Pearl was numbing the pain by disappearing into the fog of opioid painkillers. During the trial, the judge chastised her for starting trouble with jail staff and inmates. (Hard to believe anyone should think her personality, carved since she was a child, would change once behind bars) Pearl Fernandez was a train without brakes speeding towards tragedy. Yet no one will be prosecuted for “failing” to “protect” in Pearl’s case.
There is little public information about boyfriend Isauro Aguirre. A former coworker described him as “gentle” with patients at a nursing home. Who knows if this is true? His abusive behavior did not happen overnight. His twisted sense of wrong and right, what equals “corrective action,” and why it’s acceptable to maltreat a child did not emerge upon meeting Pearl. If statistics prove correct, Isauro’s personality most likely shaped and molded as he grew from a horrific childhood into a problematic youth that no one would wish upon a boy. During the trial, onlookers marveled at Isauro’s sitting in court “without emotion;” this is because Isauro is without certain emotions. Otherwise, he could have never been able to do what he did to Gabrielle. (Again: hard to believe anyone should think his personality, carved since he was a child, would change once behind bars.)
Both Pearl Fernandez and Isauro Aguirre understand their treatment of Gabrielle was ethically wrong and illegal: They hid it from officials and family. They kept the boy out of school. They kept him hidden and gagged when people came to the home. But both of them lacked a moral compass. Pearl doesn’t seem to understand why meting out such punishment on Gabrielle, why making him a punching bag for the lifetime hurt she experienced, is wrong. Isauro did her bidding, enjoyed her attention, and relished being the brute. Yes, he knew the blows were painful; but this time, it was him making the fists and not dodging them.
This is not condoning their behavior, but an attempt to understand their behavior. If we don’t attempt to understand what created Pearl Fernandez and Isauro Aguirre, we will never understand what creates a child abuser, a child torturer. Burning them at stake, beating them, or making them die an agonizing, prolonged death – all suggestions by social media surfers – might make someone feel vindicated, but it will not solve the problem.
We need to set aside emotions and learn from this case. We already know Gabriel Fernandez. We know there is no one group of individuals to blame. And we are certainly aware that, even as Gabriel Fernandez was becoming a household name, there are thousands of others like him, and even more Pearls and Isauros. It's time we start taking action and educate ourselves. This is all we need to know about the Gabrielle Fernandez torture/murder case.