She wasn’t movie-star pretty, and her expression was contemptuous. Most of her keepers probably snarled at her. “Women!” The uniformed officers shook their heads. Even some females looked upon her with disdain. Too many people liked things the way they were, and she was a rabble-rouser. Such was the situation when a photographer snapped the photo of Mrs. Helena Hill Weed behind prison cell bars. She was no stranger to prison. She was no stranger to contempt. But she was not the average inmate. 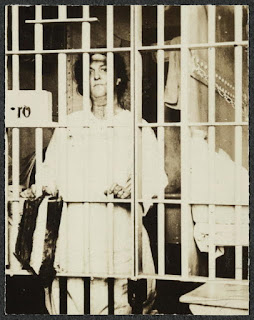 Born in 1883, Helena Hill was one of three daughters born to a Connecticut member of Congress. She graduated Vassar College and then the Montana School of Mines with a master’s degree in economic geology to become one of America’s first female geologists. Helena later learned she was meant not just to study rocks but to throw them.
Thirsty for knowledge, Helena studied journalism at Columbia. Her education took her to Rome, Paris, and Munich. She would marry Walter H. Weed, who supervised the US Geological Survey.
Lucretia Mott and Elizabeth Cady Stanton had spearheaded the US women’s suffrage movement in the 1840s. Helena joined the suffragists. She learned “Suffs” were not handled delicately by law enforcement. Women who were arrested for speaking out or marching complained of broken fingers, ill-treatment, and poor hygiene in the cells. Marchers were labeled “protesters” and placed in solitary confinement: dark, dank cells with no running water or toilet. Name-calling was the norm, even torture. But creating change wasn’t going to be easy; they told one another. Helena Hill learned quickly.
In 1913, Helena was one of several who testified before the Subcommittee of the Committee on the District of Columbia US Senate regarding police officer conduct during a suffrage parade held March 3, 1913, where thousands attended. It was her first parade. Helena testified how police protected the parade’s marchers until they went through an area where police protection was “very lax,” where some drunks began screaming insults, “it was barnyard language (referring) to roosters and the hens and the cows…” Soon the crowd closed in, with only a line of boy scouts and military men keeping a drunken, disorderly gang of large men from tearing at the marching women. Helena naively asked a policeman, three times, if he could keep the crowd away, and he reportedly told her, “I can do nothing with this crowd, and I ain’t a-gonna try.” Helena explained that the only law enforcement officers who made any attempt to assist were “a young negro officer” and an older “negro officer with a grey mustache.” The drunks grabbed at the “suff’s” banners and even tried to tear at the state flag one woman carried. Other marchers testified the same: crowds pushing in closer, drunks shouting and grabbing, and the lack of police interest in protection. Police Captain Doyle testified there were no problems. He never heard any of the police force ridicule the parade, women’s suffrage, or “the ladies …It never dawned upon (officers) that we would ever have a particle of trouble.” If an officer was not doing his job, it was because he had to stop due to “exhaustion.” 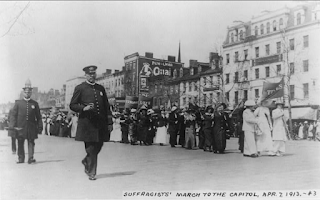 When American suffragists picketed at the White House on July 4, 1917, Helena was there, carrying a banner which read, “Governments derive their just powers from the consent of the governed.” Joined by women of all ages, all socioeconomic backgrounds, who demanded the right to vote. Police officers grabbed her, tossed her sign to the ground, and Helena became one of the first women to be arrested for picketing the White House. She was arrested for the offense of carrying the banner. They locked her up for three days in the Washington, DC jail, hoping she had learned her place. Again, rough treatment, disrespect, and poor jail conditions as expected.
The three days in the DC jail had not imprisoned her spirit. In January 1918, officers wrenched her from the gallery, handcuffing her for applauding in court; the judge sentenced her to 24 hours behind bars. That same year in August, Helena Hill’s name was listed as an inmate for 15 days when she was arrested again, this time for participation in a meeting at Lafayette Square, a large park adjacent to the white house. Helena most likely steeled herself for mistreatment. Jail still meant severe punishment for her fellow suffragists. It was a price to pay.
In August 1920, American women were granted full legal voting rights. They paid for it with broken bones, broken hearts, miles of marching, and loss of lives. They sat in jails and prisons where they were tortured, starved, beaten, and harassed. The women experienced police officers, who were sworn to protect and serve, watching them being verbally and physically abused. One of those women was Mrs. Helena Hill Weed.
But she wasn’t just a suffragist. Besides Helena’s involvement in the Congressional Union for Woman Suffrage and the National Women’s Party, she held several titles, to include vice-president of the Daughters of the American Revolution, one of the founding members of the Women’s National Press Club, and national secretary of the Haiti-Santo Domingo Independence Society. Helena was a feverish writer for equal rights, to include supporting Haitian independence. In 1927 she ran for Mayor of Norwalk, saying she had kept a household for 30 years and raised a family, giving her enough grit and experience for “municipal housekeeping.” Mrs. Helena Hill Weed died in 1958. She left a legacy, and her children became educated women and advocates for equality.