September 14, 2020
“It’s my fault he’s dead!” Mayra Rosales was crying about her nephew, two-year-old Eliseo Rosales Jr. “I was trying to pick him up, and I slipped and fell on him!” Her story was easy to believe: Rosales weighed 1,036 pounds. In La Joya, March 18, 2008, located in Texas’ southern tip, and EMTs had responded to a call of little Eliseo’s having difficulty breathing. Upon arrival, the baby was also suffering a severe head injury. They rushed Eliseo to the hospital, but nothing could save him. The handsome little boy succumbed to his injuries. Mayra’s 20-year-old sister Jaime Lee Rosales was Eliseo’s mother. Jamie and her husband Eliseo, Sr. and their children lived with Mayra and Mayra’s husband in a simple home in a quiet suburban neighborhood. Jamie had a history with Child Protective Services. In April, Jamie had signed a “Safety Plan” that included the caveat she would not leave her children with Mayra due to Mayra’s “disabilities.” Still, Jamie often left her children with her sister. Hidalgo County Sheriff’s Offices arrested Mayra for injuring a child and failing to protect a child. She had to be booked, fingerprinted, and her mugshot taken in her bedroom, then released on a personal recognizance bond because her massive bulk kept her bedridden. Jamie Lee, also arrested, was taken to the Hidalgo County Jail and held on a $50,000 bond. It seemed an open-closed case. Then the autopsy revealed Eliseo had died from massive blunt force trauma, not the kind of wounds suffered from someone falling on him, not even a woman weighing half a ton. There were “multiple skull fractures on the forehead and upper and lower rear parts of Eliseo’s skull (and) fractures that were estimated to be about a month old” (“800-pound Aunt”).

Doubt cast bigger than Mayra’s shadow: Rosales could not even get out of bed without the help of at least ten strong men, so how did she maneuver to stand, walk, and fall on the baby? She could not even swing her arm with enough force to strike. Eliseo Rosales Jr. was beaten to death. But Mayra was stubbornly refusing to change her story. She tried to pick Eliseo up when he crawled on the floor and fell on him; she told officials. Yes, she was aware of the consequences: this was Texas. The death penalty would be imminent. Death row would accomodate anyone, regardless of physical size. The truth was finally revealed during the preparation for Mayra Rosales’ trial. It was sadder than it was alarming. Before Mayra could go to trial, officials had to find a courtroom that could accommodate her size. Mayra would have to be transported to the courthouse in a moving truck and live in the courtroom on a king-sized mattress. She was already becoming a media sideshow, called a monster. Nancy Grace was disgustingly spitting out the word “fat!” Every chance the crime talk show host got the opportunity when discussing her case. As they worked on her case, ie, studying Eliseo’s injuries, Mayra’s court-appointed lawyers suspected Mayra was covering for someone. A drug cartel was supposed at one time – after all, it was south Texas, and Eliseo, Sr. was speculated of having particular illegal affiliations. Then Mayra’s mental and physical health began to break down. And she started talking. She called her attorney and confessed. The truth was Jamie Lee was an abusive mother, and Eliseo, despite his fragility, was the brunt of strikes, slaps, and neglect. On that March 18, Jamie Lee had become angry that her son was looking at her and cursed him. Then she had kicked him in the chin so that he fell backward, slamming the back of his head on the wall. Next, Jamie grabbed a hairbrush and smacked the baby across the head for not eating. As Eliseo began to gasp for air, the sisters became alarmed and called for the ambulance. While waiting to hear the ambulance’s plaintive wail, Mayra Rosales devised a plan. “I have no reason to live,” she had indicated her great bulk. “So, a death sentence to me means nothing. But you have kids. I’ll say it was me who hurt Eliseo.” Or it might have been Jamie that came up with the plan. According to another account, “When the paramedics came for Eliseo, Jaime begged Mayra to take the blame. ‘I thought I was dying anyway …so I decided to admit that I’d done it to protect my sister because I love her.’” (Zutter). And that was their plan, the story they stuck to until it began to unravel. And it was Jamie who pulled the first loose thread. “I heard she was pregnant,” Mayra explains (“Half Ton Killer?”). As much as she loves her sister, she knew Jamie would never change. This meant Jamie would stay abusive towards her children. So Mayra told the truth. 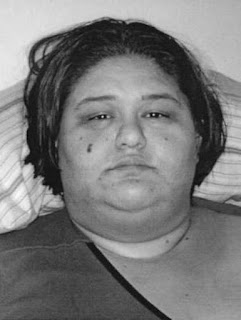 Charges against Mayra Rosales would eventually be dropped. Jaime Lee and Eliseo Rosales packed their bags and headed for Veracruz, Mexico. She was not about to pay for the crime. Meanwhile, her sister was becoming a media star. A documentary about her life and the case “Half-Ton Killer?” was filmed, and it aired on TLC in 2012. This documentary brought Jamie back to the states, where she was arrested for causing Eliseo’s death. Jamie agreed to a plea bargain and received 15 years in prison for injury to a child; her release date is 2025. The arrest, subsequent indictment, and then her freedom brought Mayra Rosales good fortune. Medical professionals learned of her story and responded. One prominent physician began to assist with full care to help her lose weight and become healthy. By 2013 Mayra Rosales had lost over 800 pounds. She was under the administration of specialists, on special diets, and underwent gastric bypass surgery and surgery to remove excess skin and tumors. She began making national appearances on a variety of news and talk shows to discuss her life. Once again, she was a media darling. Mayra Rosales is credited as the heaviest woman ever to be arrested. At one time, she was the heaviest woman on record. Accusations of murdering a child made her a hot news item. And then her false confession to murdering a child made her a hot news item. In between, 1,036 pounds kept her in the headlines for both. Sources: "7 Facts About Mayra Rosales of TLC Reality special."(January 21, 2013). "800-pound aunt charged with fatally striking toddler." (March 26, 2008). Houston Chronicle. Hearst Newspapers, LLC. Frost, M. & Owens, R. (December 2, 2013). 'Half-Ton Killer' Mayra Rosales Reveals Why She Falsely Confessed to Murder, Dramatic Weight-Loss. ABC News online. https://abcnews.go.com/US/half-ton-killer-mayra-rosales-reveals-falsely-confessed/story?id=21074469 “Half Ton Killer?” Documentary. (2012). Keels, J. & Mireles, T. (Directors). Nowzaradan, J. (Executive Producer). Megalomedia. Distributed by The Learning Channel. Mug shot: Hidalgo County Sheriff's Office Photo of Mayra Rosales at home-unknown, not credited.
child abuse child murder crime survivors crime victims death row documentary domestic violence false confessions infantile crime obesity Texas true crime