Just when it can’t be more disturbing in true crime television, Fox network has cooked up a show to compete for the ultimate tacky. “Crime Scene Kitchen” has even surpassed “Murder House Flip” – just mix ignorance with disrespect, add tackiness, and you have the recipe.

Fox describes the show: “Each episode of this cooking competition begins at the scene of the crime -- a kitchen that was just used to make an amazing dessert that has since disappeared. The chef teams are challenged to scour the kitchen for clues and ingredients to figure out what was baked. To take the $100,000 prize, the competing dessert makers will need to prove they have the technical know-how, imagination and problem-solving skills needed to decode and re-create incredible desserts and cakes from across the world” [sic].  The trailer features dripping “blood,” crime scene markers, and the host warning, “A beating has taken place” showing the mixing bowl, with “blood” dripping from a knife - yellow crime scene-type tape abounds. 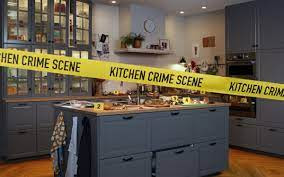 Television has evidently run out of “people who kill.” A collection runneth over with killer wives, friends, family members, neighbors, identical twins, animals, etcetera etcetera. Television “personalities” speaking in a careful cadence: “no one would suspect. The killer. Lived nearby. And was evil…” Or leaning in to ask the surviving victims, “How did you feel. When they found. Your loved one cut up. In a dumpster?” Cue slow-motion footage and music.

Real crime scenes never use cadences and music. Television, with some exceptions, has forgotten the victim lying, sometimes in a state of undress, surrounded by a group of strangers for hours. The body may have been raped or violated otherwise. The body is hauled in an impersonal bag to the morgue for cutting, probes, pokes, and photographs. Then comes a trial with those photos laid out to more strangers. It is necessary for the case, but the process is sad, morbid, and invasive. The dead might be a drug-addled prostitute in an alley or a wealthy person in a lovely home. All are someone’s child, a loved one; all victims deserve respect as can be allowed. 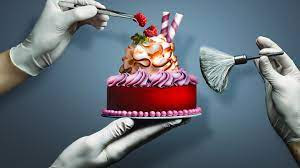 Some true crime shows do tell the victim’s story, teach safety, and educate viewers. A crime scene is never cookies and pies with fun and games with  applause. Wonder what surviving victims think when they are faced with such.

“Crime Scene Kitchen” has brought true crime television to a new low. I suggest they put it in the oven and burn it.