The Terrible Story of Grace Budd – Victim of Albert Fish

It was a cold November 1934 when Delia Flanagan opened the unsigned letter. Illiterate, she asked her oldest son George to read it. “Dear Mrs. Budd,” the author wrote, “On Sunday, June the 3 — 1928, I called on you at 406 W. 15 St. Brought you pot cheese — strawberries. We had lunch. Grace sat in my lap and kissed me. I made up my mind to eat her.”

The letter also included, “I took her to an empty house in Westchester I had already picked out ... I told her to remain outside. She picked wildflowers,” the letter continued. “I went upstairs and stripped all my clothes off ... I went to the window and called her. When she saw me all naked she began to cry and tried to run. I grabbed her and she said she would tell her mamma” [sic].

No doubt, Delia felt a wave of terror as she read the strange ramblings. Her 10-year-old daughter, Grace Budd, had been missing for six years with no sign of locating the child. One of five children, Grace was last seen departing her Manhatten home with an unassuming older man who invited her to his niece’s birthday party. They were to return later to drop off Grace and pick up her brother, Edward.

The man, introducing himself as “Frank Howard,” had initially arrived at the Budd home, following exchanged telegrams, to speak with Edward, sixteen, about a job. Frank Howard reported he owned an  upstate Farmingdale home.

“Gracie” instantly warmed to Mr. Howard. She sat in his lap as Mr. Howard raved about his farm and all its trappings- animals, fresh air, six happy kids, and healthy food.

Now, skipping happily next to her new companion, Grace, in a white silk dress with matching socks, a white felt hat, and a grey coat trimmed with fur,  clutched her brown pocketbook in one hand and the stranger’s hand in the other. She was anticipating a fun day filled with birthday surprises and lovely treats. What she got was Albert Fish: sadistic serial killer of children, AKA “Frank Howard,” her new companion who now held her hand.

The Budd family struggled to feed and clothe their children Beatrice, Albert Bud II, Grace, George, and Edward. Grace was a withdrawn, sickly child, possibly due to their lifestyle. They were another poor family living amongst other low-income families in Manhattan’s Meatpacking District at 406 West 15th Street, a tenement; the stench of factories and slaughterhouses filling the buildings with a dank odor. Father Albert worked as a porter. Thus, a wealthy, kindly man doing a favor for their family was the answer to Delia’s constant prayers. “Mr. Howard” was now considered a family friend.

The anonymous letter to Delia Flanagan ended: “First, I stripped (Grace) naked. How she did kick, bite, and scratch. I choked her to death, then cut her in small pieces so I could take the meat to my rooms, cook, and eat it. How sweet and tender her little a** was roasted in the oven. It took me 9 days to eat her entire body. I did not f*** her, though, I could of had I wished. She died a virgin” [sic]. He later confessed to dismembering Grace with a saw and meat cleaver.

“He was so kind and fatherly"

When Grace never came home, the family initially thought there had been an accident, until police told them there were no recorded accidents of an old man and a little girl, and there was no “Mr. Frank Howard.” The Budds could recall a general description of “Mr. Frank Howard,” the alias Albert Fish used upon meeting the Budd family.

After notifying law enforcement, Grace’s “missing” poster was all over town and then the country. It 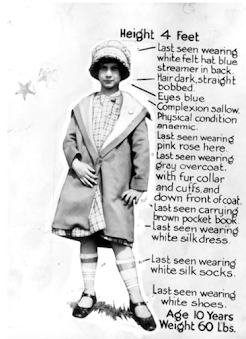 included a photo of the little girl in a hat, coat, and knee socks along with a description of what she last wore and “Complexion -sallow... physical condition - anaemic” [sic]. The photo was cut from a family picture. “He was so kind and fatherly; you wouldn’t think he could step on an insect,” Mrs. Budd sobbed about "Mr. Howard" to the media. “How he fooled us!”

The letter written to scare and shock the Budd family was Albert Fish’s downfall. It was written on stationery from the New York Private Chauffeur’s Benevolent Association. Police would link the stationary to Albert Fish; Fish looked like “Frank Howard.” Fish’s prints on the telegram sent to Edward Budd matched his prints. And when the cops sat down with Fish to interview him, the dowdy old man confessed all with a smile. He boasted he “had killed a child for every state.” As with most cases of serial killers,  no one will ever know the number of victims. Grace was one of three murdered children positively linked to Albert Fish.

Albert Fish also explained Edward had been the intended torture/murder target until he laid eyes on little Gracie.

Investigators discovered Grace’s skeleton on the grounds of the abandoned house.

Albert Fish was found guilty of murder in 1935 and executed by electric chair in 1936.

Delia Flanagan would never forgive herself for allowing her daughter to leave with Howard/Fish.